Back to Basics in B2B Marketing

Back to Basics in B2B Marketing 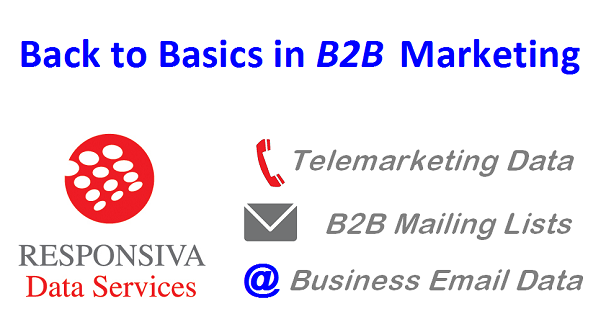 The advice of most business coaches is to test and measuring (approximately) ten different marketing channels, whilst others recommend sticking with just the best two or three initiatives which work best.

I am always looking for new initiatives to trial for Responsiva, and in doing so measure the results rigorously. Different businesses and approaches to market will inevitably yield different results, but hopefully in sharing Responsiva’s marketing experiences you might give feedback on your own strategies and suggest any new ideas. I really welcome them.

The initiatives listed below are just those targeting new customers. Customer management, reactivation, referrals, rewards etc would open up a whole new article.

The four big names are well recognized; Linked-in, Twitter, Facebook and YouTube. Each offers a different approach to market and all four should be explored. Put things into perspective though: to manage them effectively, in my opinion, an investment of a minimum ten minutes of your time is required daily. Do the math and that equates to a solid week’s work per year. Or a whole month’s work if you do all four. Whilst corporates can invest in teams of employees to manage their social media, the small or micro business cannot. So getting the balance right with time invested in social media is key. After dabbling in all four, I narrowed Responsiva down to just two: Linked-in and Twitter. Ten minutes per day on each keeps the accounts growing, and both have yielded (some, but not many) enquiries. Neither are the most effective route to market, but there is no cost other than small investment of time.

I am planning the creation of a few promotional videos as well this year. Not yet convinced of their value, but they can be spread across all social media channels.

Many micro businesses avoid building a website. They can be costly to set up and maintain, but remain an essential source of information for prospects to be pointed at in order to feed into the enquiry process. A high budget is not essential these days, so at the very least a holding page with some basic facts is better than none. A website is essential; it says what you do.

These are also free in terms of cost, but require the investment of time; a commodity in short supply for the single-person business such as Responsiva. Nobody can write about a company better than the business owner, so this process absorbs another thirty minutes or so each week. Business services need exposure, making written content invaluable. The most rewarding aspect is that a weekly article can be uploaded to the website and all social media platforms, so everything is connected to the aforementioned free channels and feeds into them well.

Responsiva used to invest heavily in Google & Bing pay-per-click advertising. But by 2010 the cost per click had increased (and the rate of enquiries decreased) to the point where these once-lucrative campaigns were costing more than their return. Whilst I wouldn’t rule out trying these marketing channels again in 2017, it would be with some degree of trepidation and tight budgetary caution. Test & measure precautions prevail.

Alternative historic advertising channels have included online directories. And here is an amusing story which I really want to share. Responsiva used to advertise with several online directories until 2012, at which point it was considered to be a waste of money. One directory called me to ask for a renewal and explained that if I searched google for a specific search term then I would see their advert in first place. Indeed it was. So I asked what would happen to that advert if I cancelled my subscription, to which they replied the placing would be lost. “Does that mean the one in 2nd place will then become 1st, the 3rd place go to 2nd etc?” They agreed. In second place at that time was my own website, so I explained that by cancelling said subscription my own website would be promoted. They didn’t take it particularly well.

Social media (pay per click) advertising with the big four is always worth exploring. I ran a campaign throughout January 2017 with Linked-in pay-per-click. 100 clicks later and zero enquiries from this channel. Perhaps my message was wrong, or the website not engaging enough. But I did test thirty different advertising messages, and the website hasn’t changed since yielding multiple enquiries from other channels. So I got to thinking that this wasn’t a great route to market, and canned the campaign just before month-end. Trying out Twitter advertising next.

Wasn’t this the in-thing of the Naughties? Six historic SEO contractors have been tested. Three were good; one of them was fantastic. Two others delivered virtually nothing and the sixth I never heard from again after paying for a service. I feel some empathy for the genuine players in the SEO sector; Google can punish them heavily with an overnight update that trashes the keyword rankings they have fought so hard to deliver for you.

Perhaps the main issue with SEO is that you feel like the donkey with a carrot two feet in front of your nose. Who is to say what your competitors are investing in this activity? As a general rule the big guns win top slots by paying more. But what has been won exactly? It can take a heavy investment to gain a first placing in Google, and the finances only self-justify if the return is in balance. From personal experiences, there have been some good SEO campaigns which yielded fairly well, and were delivered by genuine professional effort. So I will dabble in this channel from time to time, but recommend a “proceed with caution” approach and always check references of SEO providers before embarking on a new supplier in this field.

Every industry has its trade press magazines. Perhaps a thing of the past in paper form, but they still exist online. In the days of employment, I used to read the likes of Precision Marketing & Marketing Week religiously, and even The Grocer was a very popular industry-related publication. Data Strategy came on the scene a little later and that was a well-refined magazine which I genuinely looked forward to reading. So I tried some advertising in two of these but the responses (and sales from those responses) did not marry up well with the investment.

Corporates can afford to advertise under the guise of ‘brand awareness’, but micro companies cannot; they need a return on investment. So it is unlikely I would ever consider trade press advertising again. Partly because I take the view that a high percentage of the readers of these magazines are suppliers (sellers) into such trades, rather than the traders themselves (buyers).

I tried many of these when first starting out; some are more formally structured than others. My personal preference is towards the less-well structured, enabling you time to meet people. Whilst the early mornings lead to giving up on this concept for a few years, I re-visited them at the start of 2017 and was pleasantly surprised, so am now committed to attending one event per month. It’s enough.

I started Responsiva in 2003 with some door-drop letters in local business parks, offering data services. This didn’t work: no responses. So I then sourced a database of 500 targeted business prospects and wrote a mail-merged letter to them. Five responses came back. One was a time waster, four wanted a quotation, one converted to sale.

500 postal letters flowed from my home every week thereafter. The numbers were religiously accurate: (+/- 1) five responses each time. Four or five quotes and one new customer.

Nowadays I do none of this manual printing & packing, and pay no silly prices for stamps either. Batches of 5,000 – 8,000 letters are printed at a time, using the services of a mailing house and earning the postage discounts available from this larger volume.

The message needs to be clear: Say what you do, keep it to one page, drop the cheese and end with a simple call to action: a no-obligation freebie. The freebie is a simple concept; it’s simply to enable a live demonstration of service with no invoice being raised. A win/win.

For Responsiva, postal mailings started as the primary route to market and remain key today. Perhaps that’s due to knowledge of getting the right data to market to.

Cold b2b email marketing has not been as successful. Unless you have previously touched a prospect from alternative channels, do they really want to receive a cold email from you? This frustrates me a little; marketing to cold business emails is perfectly legitimate (though many email platforms don’t permit it), but I take their point. The truth is that it’s a very lazy way to operate, cutting corners to hit a prospect. At least a postal letter shows you care enough (chose them specifically) to invest in the stamp. Marketing data with email addresses can be useful; such as forming the postal letter text to include “I will be emailing you on <date> to <email address> to provide you with more information”. At least then your company has introduced itself more professionally and had its first touch. I haven’t emailed cold for many years now; all prospects have had at least one touch first.

Finally, telemarketing. This is the biggest mixed bag of the lot. Being labour intensive it requires a premium investment, but who should make those calls: a sole trader telemarketer, a larger company, or employ your own in-house cold caller (even just on a part-time basis)? There are merits and pitfalls with each option, and I have experienced good and bad campaign results with all three. Either way this route to market does need to be tried and tested.

Keep it simple, cut the cheese and don’t lay a silly trail of golden breadcrumbs which attempts to force prospects into saying “yes” to. It’s quite basic for Responsiva: would you like to test some free samples? Prospects will give a direct answer to a direct question.

The key to all marketing is test & measure, so I am delighted to have tried out so many channels and met so many suppliers along the way. The overwhelming majority want to deliver a great service with positive ROI. Back to the first paragraph of this article; it would be better to stick with just the best two or three initiatives which work best, whilst dabbling in other marketing channels periodically.

View our 2016 financial prospectus brochure for an easy to read guide on all of the services offered.